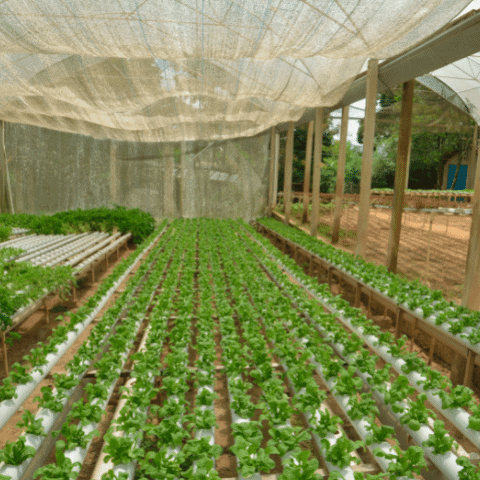 Hydroponic greenhouses are becoming more and more frequent. Their technology is advancing at a fast pace and now even smaller greenhouses have a chance of being successful.

Hydroponic greenhouses are very profitable. They are more productive than soil farming, but they require a higher startup cost. High-value fruits and vegetables produce the most revenue. The average hydroponic greenhouse makes $10,482 in a 3.6 weeks crop cycle.

However, the costs of hydroponic operations are a little different from those of soil farming. There are a few myths and many things you can do to maximize the profits of your hydroponic greenhouse. Here are 10 facts that will help you maintain a profitable greenhouse.

Things To Know To Have a Profitable Hydroponic Greenhouse

1. High-Value Fruits and Vegetables Are Most Cost-Efficient

Producing high-value vegetables and fruits is the best way to take advantage of the efficient but costly environment of a hydroponic farm.

Common, low-value crops like rice or wheat grown in soil farms have very low prices. It would be difficult to compete against them. Meanwhile, high-value fruits and vegetables can have an edge on the market and can even be sold as “luxury” food.

These are some of the most profitable crops you can grow in your hydroponic greenhouse:

Root plants like carrots and radish can also be profitable but are more difficult to grow.

Among all the hydroponic produce, the demand for fruits is expected to grow the most in the near future.

Lettuce and similar vegetables are technically a low-value crop, but their low maintenance and improved yielding in hydroponic farming make them suitable for hydroponic greenhouses.

2. Greenhouses Can Produce All Year Long

Hydroponic greenhouses produce year-long harvests. The closed environment of a greenhouse allows you to precisely control the conditions for your plants, without having to worry about climate and season.

You’ll be able to harvest any fruit or vegetable at any time of the year, without any interruptions.

The main flip side of starting a hydroponic farm is its high initial cost. The average cost of setting up a 500 sq. feet (45 m2) hydroponic operation is $110,000. This investment includes:

Still, thanks to its higher-yielding and efficiency, hydroponic greenhouses are very profitable in the long run. If this challenge can be overcome, hydroponic farmers can only expect their business to grow over the next decade.

In traditional farming, the soil must go through a period of restoration before the next crop can be grown. Meanwhile, in hydroponic greenhouses, you can plant the next crop as soon as the previous one is harvested.

Additionally, hydroponic plants have faster growth thanks to having all the nutrients readily available in the water.

Plants grown in hydroponic farms can produce yields up to 11 times higher than those grown in soil farms.

In hydroponic greenhouses, plants can be stacked vertically and, since their roots don’t grow as much, they can be placed closer together. Hydroponic farms can grow 3 to 10 times more crops than soil farming using the same amount of space.

Hydroponic greenhouses can produce 41kg (90.39 lbs) of produce per sq. meter each year. Compare that with the much lower 3.9kg (8.60 lbs) in the case of soil farming.

Perhaps the most significant maintenance cost of hydroponic operations is the use of energy. Hydroponic farms can use around 82 times more energy than soil farms. This is mainly due to hydroponic farms using specialized, artificial lighting.

The average expense in electricity for hydroponic farming is around $32 a day, and this can scale up for larger operations. However, this might be compensated by the fact that continuous lighting helps to produce higher yields.

7. No Need for Pesticides

Hydroponic farming has a much-reduced usage of pesticides. There is no weed without soil, so dealing with weed is out of the picture. by growing without soil you’re also dispensing of all the common pests that come with it.

Thanks to being in an enclosed and controlled system, it’s easy to identify the pests and to introduce biological measures (like adequate predatory insects) without resorting to strong chemicals.

You can categorize hydroponic systems depending on where the roots of the plant are located. There are two main types:

Both systems are feasible, but liquid ones show a higher potential in market growth since they scale easily.

9. Hydroponics Use Water Much More Efficiently

Hydroponic farms use up to 90% less water than traditional soil farming. The water used for irrigation is recycled and pumped back into the plants until it is consumed and absorbed by them.

This is great for environmental reasons, but it also makes hydroponics extremely convenient in regions where access to water is difficult or expensive.

10. Hydroponics Will Become More Profitable in the Future

Right now, hydroponic farming accounts for 9.5 billion dollars in the global market. However, that number is expected to rise to 17.9 billion dollars by 2026. That’s an annual growth rate of 11.3%!

This might not impact the costs of setting up a greenhouse today, but it means that doing your investment will only become more valuable in the coming years.

The Future of Farming

Hydroponic greenhouses can be very profitable if you put them to good use. They produce much larger yields in comparison with soil farming. You’ll be able to grow any produce throughout the year, regardless of the season.

High-value fruits and vegetables like tomatoes, strawberries, and leafy greens are the best crop choice from an economic point of view.

Hydroponic farming will only keep growing in the future as the need for food increases and more advanced technology is developed.